You are here: Home › Blog › Deteriorating World Markets will have Long Term Impacts on NZ!

Feedback from what’s happening in the NZ market update #4

In our last update #4, we focussed on the New Zealand property market and what we expect to see over the coming weeks, months and possibly years moving ahead after Lockdown is lifted. Since writing that article we have been contacted by several senior people in the banking, real estate and construction sectors who not only backed up what we are saying but gave us a realistic snapshot to what was actually playing out.

In short, there are some serious ramifications happening right now! With banks working alongside construction companies, businesses & real estate developers and investors trying frantically to dig themselves out of a deep hole they find themselves in. With growing unemployment and no international tourism expect this to worsen moving forward.    If you haven’t read that article you can read it here https://www.propertyinvestorcentre.co.nz/changing-nz-property-market-due-to-economic-impacts-of-covid-19/

Be careful what you read & believe!

We have already mentioned to be very wary of some of the articles, reports and comments coming from people and companies who have vested interests in certain businesses which are struggling at the moment. One of these being Real Estate!

Our advice is, be very careful and get a second grounded opinion, we are speaking with clients daily who are being led down the garden path and ‘set up’ to fail with age-old industry tricks with the only result being a sale and benefit for the agent. Being patient, stepping back and having the right mind-set could save you hundreds of thousands of dollars in this current environment.

In this update, we will look at what is currently happening with major world markets and how this will impact NZ. We don’t pull any punches in our opinions and tell it how we see it, so be prepared for some mind-blowing market statistics which we only see getting worse moving forward.

The United States is meant to be the Strongest Economy in the world right? Well, that’s what they try to tell us anyway, as we go through this mess you will realise it is far from the truth currently. It’s no secret the Trump administration has made a complete mess of their response to the virus, along with many other World Governments too ignorant and slow to respond. And what we are witnessing is the United States in complete chaos!

In our original blog, we showed a picture of a food line for a soup kitchen in the 1929 great depression, and we mentioned that it was possible this could happen again, some people laughed at us for being over the top.  Take a look at what is happening across the US right now … 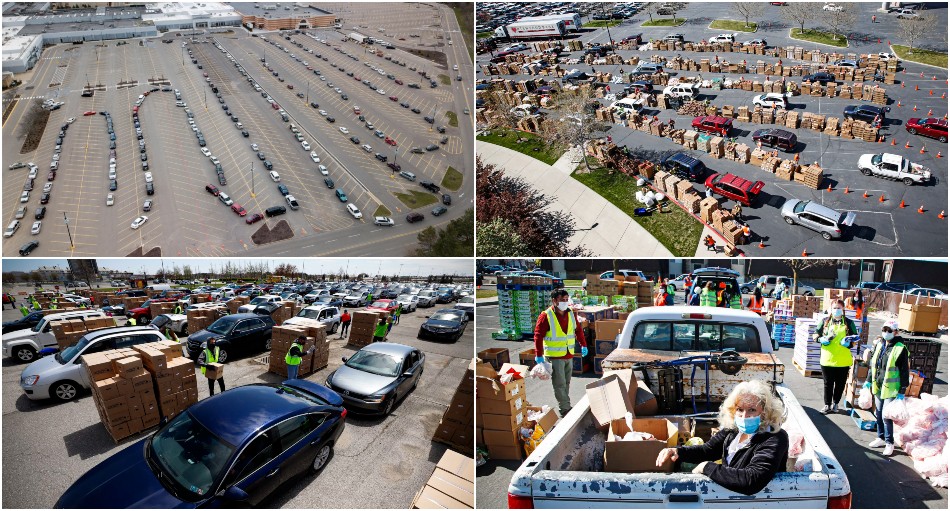 This has ballooned to official figures of 15% but true calculations have the figure at a massive 24%, in the 1929 Great Depression it was 25% 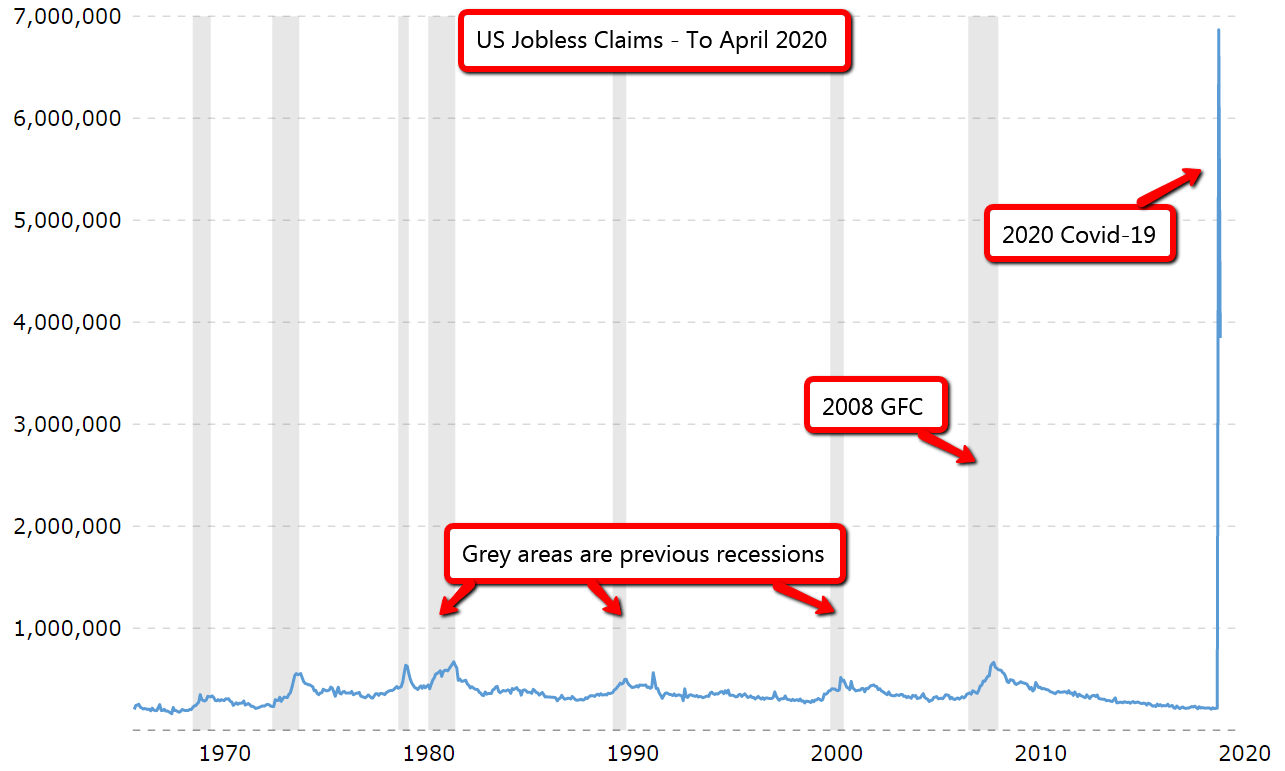 This amazing never-ending calculator will show you all you need to know about the U.S’s huge escalating debt. Due to the current situation of lockdown and high unemployment we are watching the US national debt climb at an alarming rate, currently over 25 Trillion!

Go to the Debt Clock here to see how fast it moves, currently it’s climbing $100,000 every 3 seconds! Next to this is the US tax revenue which is reducing $100,000 every 14 seconds (remember any Government needs revenue for all its spending) both of these numbers are running at a rapid speed in OPPOSING directions, It doesn’t take an Einstein to work out this is a very alarming Government statistic! 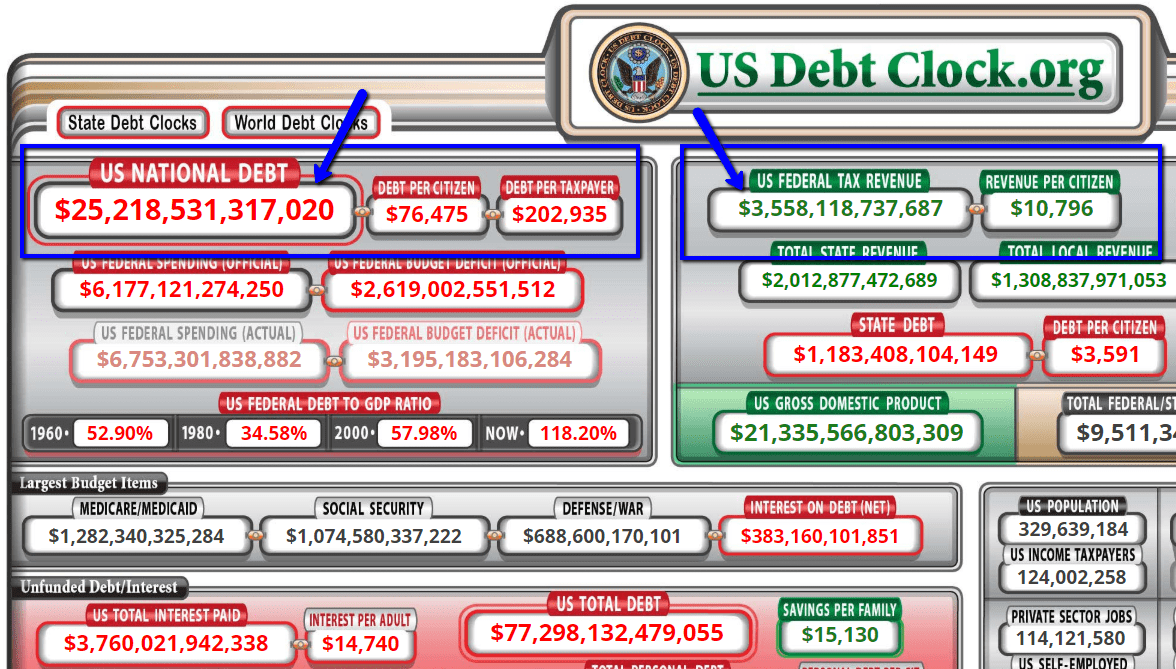 So far it’s hard to keep up with the amount of ‘stimulus’ the US has injected into its economy to prevent a collapse. In total its around $6-7 Trillion Dollars and with Q2 (April, May & June) numbers promising to be totally horrendous it appears they have another $3 Trillion earmarked just for this 3 month period. Remember this is what they call “Quantitive Easing”, which is in fact money printing!

What is this money actually doing you may ask? The answer is it’s bailing out big enterprises and businesses so they don’t fold and bring the economy collapsing down. The companies receiving most of this injection of stimulus are the ‘FAANG’ companies, namely Facebook, Amazon, Apple, Netflix and Google which incidentally are all listed on the Dow Jones stock exchange, other big companies on the stock market facing bankruptcy have been bailed out as well including Boeing, United Airlines, ExxonMobil (Oil), and Halador Energy (Coal) to name just a few.

All of Americas SMEs (Small and Medium enterprises/businesses) which are hundreds of thousands of restaurants, bars, shops and any small retail business throughout America are receiving next to nothing. They basically have to fend for themselves. Note these SMEs are NOT listed on the Dow Jones.

From the lows in March 2020 after the initial crash of over 30% on the US Stock market we have since witnessed a clawback with the Dow regaining 50% of it’s lost value, the NASDAQ 90% and the S&P500 regaining 100% of lost value back up to the original highs of February 2020.

This clawback is called a “Relief Rally” and has happened many times with previous share market crashes.

The reason it’s called a relief rally is because it’s a short term recovery which is then followed by an even bigger downward freefall!

(Graph below showing the initial crash of 1929, then relief rally then big crash following) 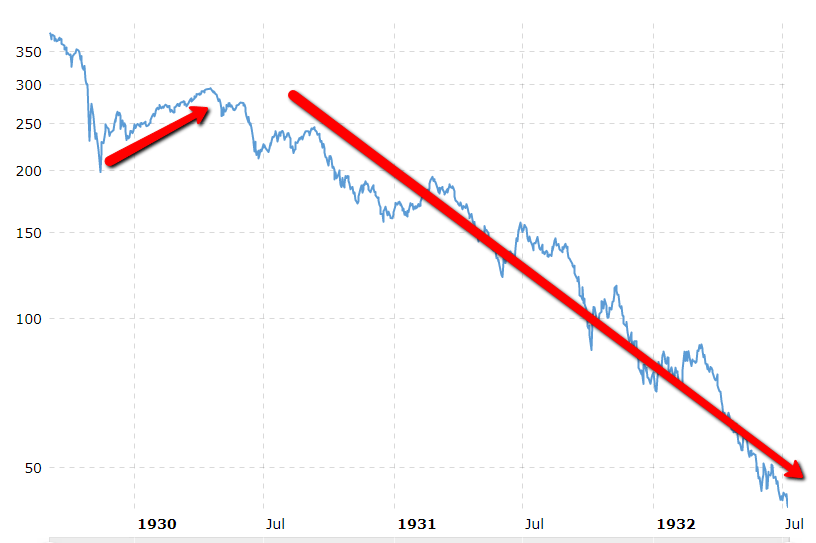 This current 2020 Relief rally has gone on longer than any other, which is amazing considering the shocking record statistics of growing unemployment, benefit claims and high bank mortgage forbearance (over 4 million Americans not paying their mortgage repayments). 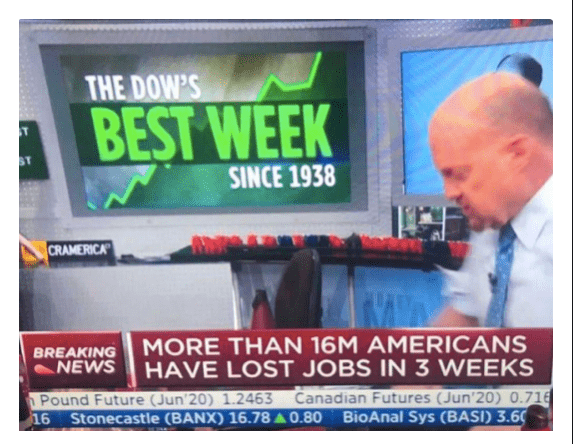 The main reason for this is due to the US Governments stimulus (printed money), pumping trillions into the big FAANG companies and the bailouts of other big failing companies which make up the majority of the US stock market. This has been like a massive Methadone shot in the arm artificially propping up a market which under any normal market conditions would be in a natural freefall.

This is blatant Big Government Smokescreen Corruption happening right in front of everyone’s eyes ….but only a few see it!

The reason the U.S Government is doing this is to stop the markets collapsing which would trigger a domino effect causing bond and repo markets to follow suit and spreading into other world markets in a ripple effect scenario. 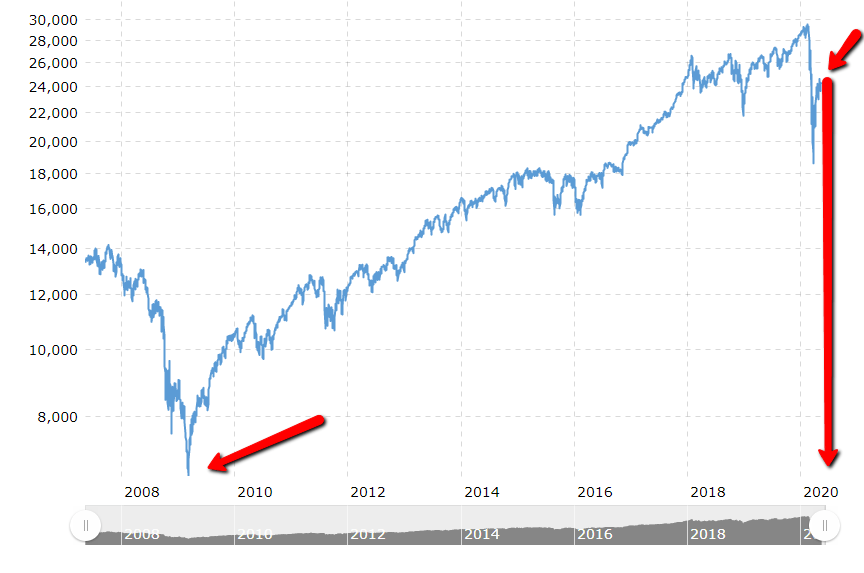 When you see Investors like Warren Buffett (chairman and CEO of Berkshire Hathaway) considered to be one of the best Investors in the World, publically stating his company is not buying stock currently as he doesn’t see anything offering value and believes it will get a lot cheaper, you do have to sit up and listen!

You may ask, “What does all this have to do with us in New Zealand and who cares about the U.S’s problems?”

The fact of the matter is NZ might be a small isolated island nation BUT what happens on world financial markets impacts us too, there is no escaping it. We have been following these world markets closely and have only given a snapshot of just the US situation, the UK & Europe’s economies are in the same desperate predicament financially, and most of these countries are still months away from leaving lockdown completely.

The US stock market is precariously balanced right now, remember the Dow Jones accounts for 50% of world stock markets. We see this as an extremely high-risk situation where the relief rallies have run their course and we could be in for a large stock market crash.

If this happens world markets including NZ will be seriously impacted, bringing major implications for our financial markets, our real economy, including big losses to Kiwi Saver & Pension funds…watch this space!

If you think when the world leaves lockdown it will be business as usual, you need to think again. The economic carnage we will witness moving forward will be on a scale not seen for generations since the World Wars and 1929 Great Depression.

Just this week we saw two of New Zealand’s bigger companies Sky City lay off 700 employees & Bunnings shut five of its stores that alone is over 1,000 people unemployed in one week!  We will see this scenario continuing as the dust settles and reality bites.

Being aware and understanding the true scale of the situation is half the battle in being prepared and two steps ahead of the game. Which is key to not only surviving but thriving in this new economic environment. There will be losers and there will be winners, it’s just a case of how you navigate yourself through the new economic jungle we find ourselves in so you emerge out the other side a winner!

In times of change, there are always great opportunities

It will be the educated investors who have the knowledge and confidence that will be able to pick up the great deals that will present.

Look at increasing your knowledge, attend free training webinars.  Invest in yourself! – An Investment in Knowledge pays the highest return!

It’s not what you know that holds you back, but what you don’t know!

Consider working closely with us in our e-Coaching Property Mentoring programme, where you work through all the training content from home and consult directly with Clint or Shane via online video meetings, absolutely perfect for these bizarre social distancing times we face. We are extremely experienced at operating in this way, as our entire business has been solely web-based and online for the last 11 years, so its completely business as usual for us.

The markets changing, the ‘buy and hope’ methods that some people employ, will no longer work, you will need to gain a better understanding of the market and how to invest and profit through a downturn, in a counter-cyclic manor –  Our prefered way to invest.

We are offering free one-on-one strategy calls via online video meetings, so if you’d like the opportunity to speak with one of us where we can meet properly, discuss your situation, ask a few questions and see if we are a good fit to help you move forward with property investing, then take this opportunity to schedule a call now!

The Changing NZ Property Market due to Economic Impacts of Covid-19
The Investing Rules have changed – Is it a game changer?