You are here: Home › Blog › Watch out for this Interest Rate Trap – Happening Right Now!
By Shane Allen on June 24, 2021 in Blog

It is always a good idea to keep an eye on interest rate movements to keep track of current trends and especially so you are not caught off guard by behind the scene moves.

Right now there are things that are happening behind the scenes which should ring alarm bells for some, we call it the “Interest Rate Trap” and many won’t realise what has been happening unless they have a finger on the pulse with interest rate movements.

The floating (variable) rate is between 4 – 5% currently which should start to raise some red flags immediately, This is because the floating rate and the 1 year rate are historically usually quite similar, but not at the moment.

The main trap is that quietly behind the scenes the longer term fixed rates have been climbing. The 5 year fixed rate in mid-March was 2.99% (Westpac) now its 4.29%, so a rise of 1.3% in 3 months. Do you get what they are up to yet? This is nothing new it’s an old bank trick in this part of the cycle.

The Banks are enticing people to lock in the low 1 year rate while behind the scenes the longer term fixed rates are rising. At some stage the 1 year rate will start to rise especially with the rising inflation and it is at this point everyone who has a 1 year fixed mortgage will look at their options and to possibly fix longer while interest rates are low. It is then they realize it’s TOO LATE as longer term rates have already moved up.

With 77% of New Zealand’s Mortgage debt currently fixed for 12 months or less this is quite a dangerous situation! 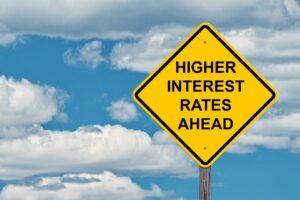 I know some clever investors who in March have already fixed long term for 5 years at 2.99%, I am picking the 1 year rate will be higher than this at some stage, it already is with Kiwi bank (3.04%) so some people have already taken advance action with the impending increasing rates by foregoing a little more now in payments but in the long run they will make massive savings and are already seeing those benefits.

Let’s face it rates are at historical lows never seen before in our lifetime, they now look to be trending upwards and if they doubled to around 4 – 5% that is still very low levels but what you have to ask yourself is where do you sit with your mortgages and the interest rates you are paying where you are comfortable, and what happens if they do rise up to 4 – 5% or more? It still isn’t too late to lock in some solid long-term rates, yes they have risen but they are still cheap when you step back and look at them.

So if you had 5 mortgages you could have the fixed terms all expiring in different years. Even if you only have one mortgage you can split your mortgage into 3 different parts and fix for different terms, maybe 1/3 one year, 1/3 three years and 1/3 five years is the safe road to take.

Or you can carry on with the cheaper 1-year rate but that comes with the uncertainty of what will rates be in 12 months. What we can say with some certainty is rates look to be on the rise so start thinking about what options you are going to take.

Major Turning Point in New Zealand’s Property Market
Are There Any Good Buying Opportunities in the Current Market?